Working with Visual Studio 2015, you must have experienced the slowness and the overall sluggish performance of the IDE, especially when you are working with large solutions. There are instances when Visual Studio consumes high memory and eventually the IDE crashes. Determining the actual root cause of this slow behavior is a challenging task. In this article, you will understand how Visual Studio 2017 will overcome few of these biggest pain points of Visual Studio 2015 like frequent IDE crashes, high memory consumption, slow solution load time and make the IDE much faster for day to day development work.

Deep dive into the problem statement –

As developers, we tend to add in so many extensions these days to boost productivity – ReSharper, NCrunch, OzCode, Productivity Power Tools, Web Essentials, SonarLint , Code Cracker and the list goes on. There is every chance that one of these added extensions is causing an overall slowness and making Visual Studio IDE unstable.

Visual Studio 2017 now automatically identifies tools/extensions that slows the startup and solution load time . It pops up a notification in the IDE to the user identifying the problematic extension name.

There is a new window called ‘Manage Visual Studio Performance‘ which lists the extensions and tools that negatively impact the startup performance. Now the user is in control of how he/she wants to handle the identified performance bottlenecks. This feature allows the user to take an informed decision to either report the issue to the extension owner or have it disabled until the performance issue gets fixed. 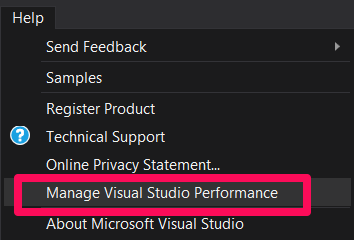 When I opened the ‘Manage Visual Studio Performance’ window, it provided me with the details of the extensions that were slowing the IDE and by how much time.

I was a bit surprised to see NCrunch to be the biggest offender. But I guess I understand that now, since NCrunch is an automatic concurrent testing tool and runs the test suite, when any code changes are detected.

However I took a decision to disable NCrunch during the IDE startup, and enable it when I am doing development work. 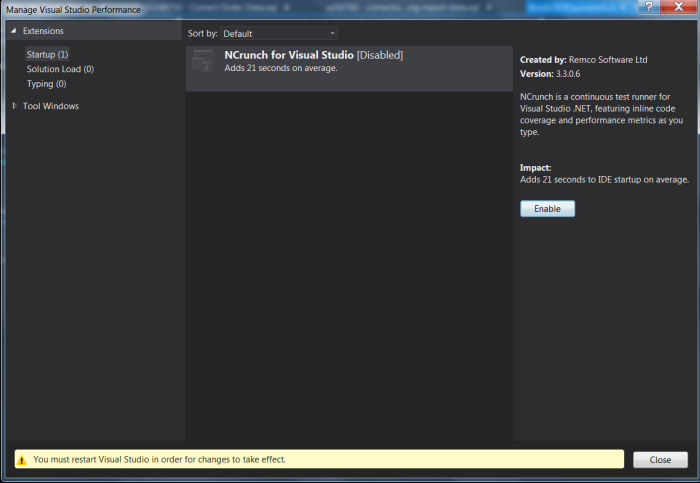 Once I disabled NCrunch, and restarted my Visual Studio, it came back up much faster. I do not recommend you to do the same, but I appreciate the fact that I was able to identify the slow performing extension and take the apt action from my end. It might be all together a different extension for you, but at least you can identify them now.

Along with Lightweight Solution Load  feature, this is one of my favorite features in Visual Studio 2017 and am sure will receive lot of love from the developer community as well. To recap, 3 reasons why I love this feature are —

Windows Workflow is now an individual component in VS 2017 RC